The MLB: The Show series has been going for the past thirteen years and while I gave last year’s edition an 8 out of 10 but I still felt like there was something missing. (Said review can be found here) Now that it has been a month/a month and a half since MLB 18’s release I figured I’d review it and give it another shot. This time around it looks like things have changed. The timing of this review is the way it is due to ironically the fact that I couldn’t put down the controller. There are tons of games I could have been playing instead of this. I could’ve gotten back to where I was in Horizon, beaten God of War, Doom, and countless others that are on my backlog but MLB keeps calling my name. So let’s jump in! Oh wait, that’s an Xbox 360 tagline…

As someone who’s from New York, I am happy for once to play as the Yankees without having to either dump prospects for better players or trying to move aging ballplayers who aren’t producing in the lineup. Not only does the lineup produce but most of the time Judge, Stanton, and/or Sanchez carry the team on their backs and make things easier for the other six batters in the lineup. As of this review Judge and Stanton have a combined 70+ home runs and over one hundred runs batted in. Sanchez is slowly making his way up there with over twenty home runs and sixty RBI’s. I am also playing as the Brewers, Royals, and Giants in my four team franchise. Speaking of franchises, one of the unfortunate casualties of the development of MLB 18 was Online Franchise mode which many people enjoyed and some think was removed in favor of Diamond Dynasty and the microtransactions associated with that mode. This doesn’t really affect me as I see MLB The Show as a single player game regardless of Diamond Dynasty as I mainly do the PVE events.

“On February 23rd, 1960, a brass band played Auld Lang Syne and 200 diehard fans watched, as a two-ton wrecking ball, painted to resemble a baseball, began to demolish Ebbets Field in Brooklyn: the home of the Dodgers, from 1913 to 1957. Roy Campanella was given an urn filled with dirt from behind home plate: his home, for 10 years before a car accident ended his career. For 44 years, since Charles Hercules Ebbets had built his park on a garbage dump called Pigtown, Ebbets Field had united the hopes of the borough of Brooklyn, and had been home to Wilbert Robinson and Dazzy Vance; Red Barber, and Hilda Chester, and the Dodgers Sym-phony; Leo Durocher, and Pee Wee Reese, and Duke Snider; Larry MacPhail, and Branch Rickey, and Jackie Robinson. ” = Narrator: Ken Burns: Baseball 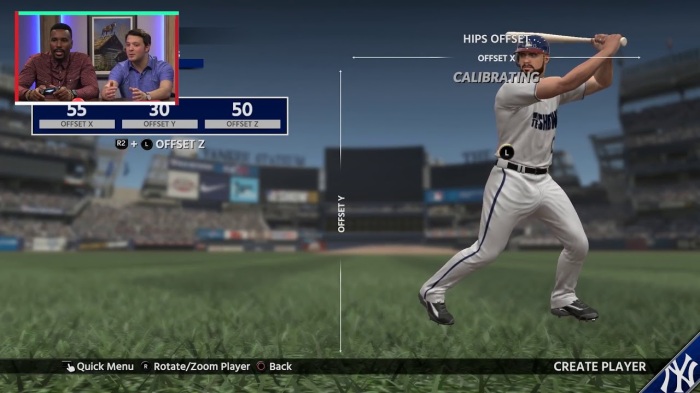 As with every installment of this series the animations change each year if a player changes their windup, stretch, or batting stance. This is where Sony outdid themselves. In MLB 18 a batting stance creator was added where you (the community) can adjust players stances in the event they are changed mid-season. This is completely futureproofing the series by giving more tools to the community. I hope a similar thing can be done with pitching as seen in MLB 2k8… but hopefully with more options. Only time will tell.

“It’s Deja Vu All Over Again”

While it seems like there would be reason for anger due to the removal of Online Franchise but there is enough change in the game to make even the biggest MVP Baseball fan go “Wow”. Simply put this is the best baseball game I have ever played and I hope every baseball fan who likes video games buys this game.